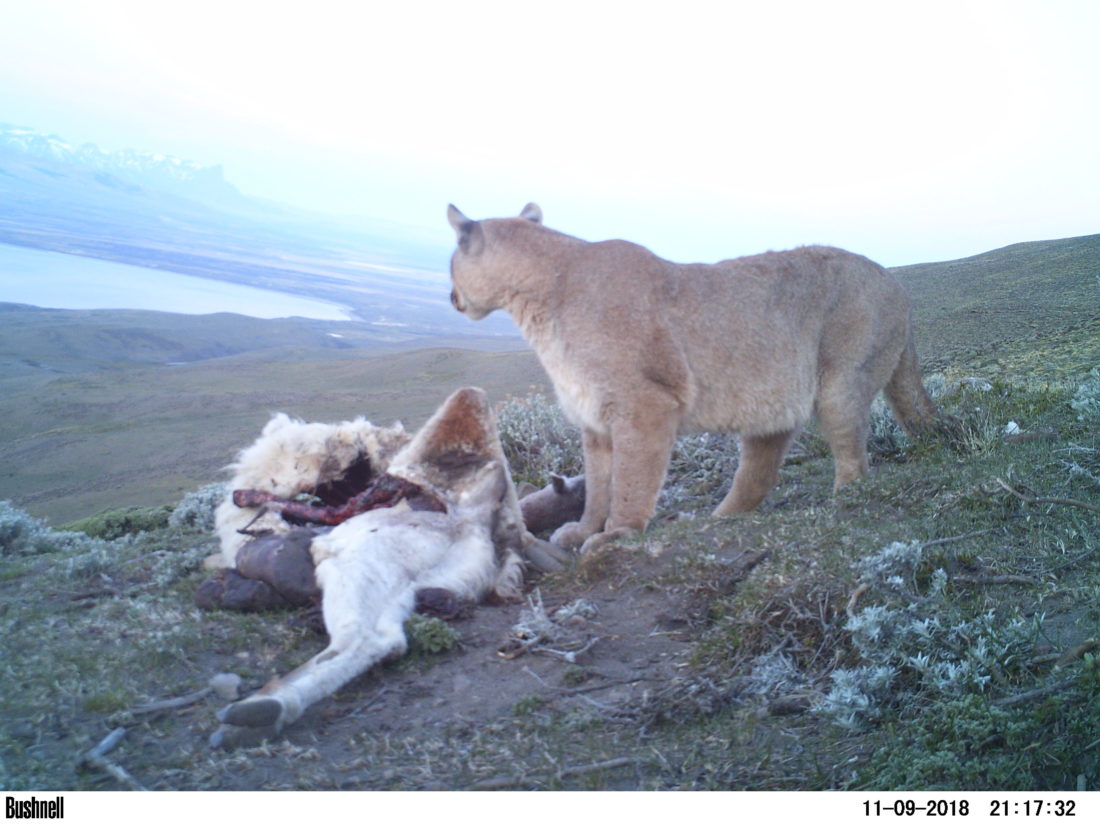 Some exciting and unexpected discoveries from the Awasi Puma Foundation

During the course of last season (October 2018 to April 2019), the Awasi Puma Foundation expanded into Estancia Lazo, a hotspot for pumas. In the next two blogs we will take a closer look at the great work our team has been undertaking.

Estancia Lazo, an expanse of mountains, grasslands, lakes and forest in Patagonia, is emerging as a hotbed for puma spotting since the landowner, Don Jorge, decided to stop sheep rearing (following a number of puma attacks) and focus solely on cattle.

In fact, the estancia is now so well-populated with puma that it acts as an “incubator” territory for the big cat population, with maturing adolescents reaching independence and crossing into neighbouring estancias to look for new territory to make their own.

And so, Estancia Lazo has been at the forefront of changing attitudes towards these magnificent animals – in essence, no longer seeing puma as a threat to be controlled, but a charismatic animal that can draw in tourists from far and wide. 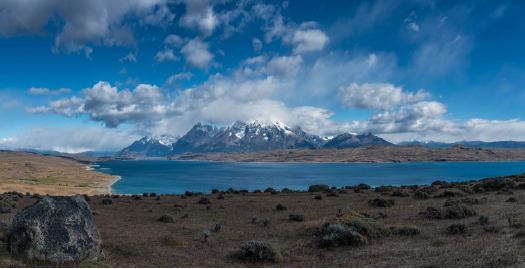 The team spent some time with Don Jorge and the local gauchos to get a feel for the puma movements across the estancia and identify which spots might work best for puma sightings. Many of the gauchos reported having seen puma on the estancia and their local knowledge and experience was vital in getting to know the habits of the local puma population.

After much discussion, the team settled on “La Meseta”, a crossroads on the plateau commonly known in the area as a hotspot for puma traffic, to start their research. A spot locally referred to as “The Lion’s Den” is testament to the number of puma that roam the area – this used to be a favoured spot for hunters in the bad old days. 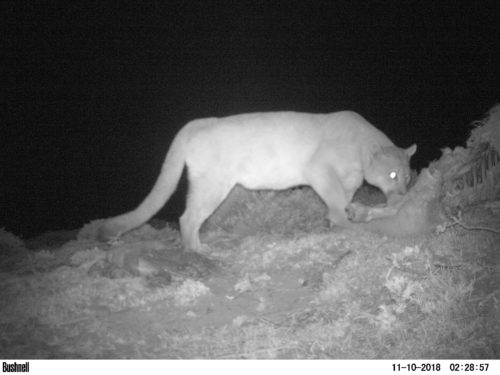 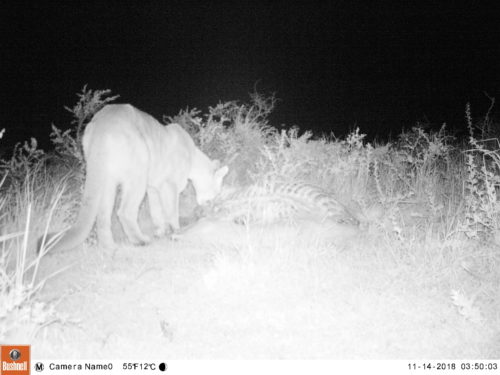 The team visited La Meseta several times, on one trip spotting a kill and laying a hidden camera which captured footage of five pumas feeding on the carcass. Several more visits follow to help the team familiarize themselves with the area and decide on the best spots for cameras. 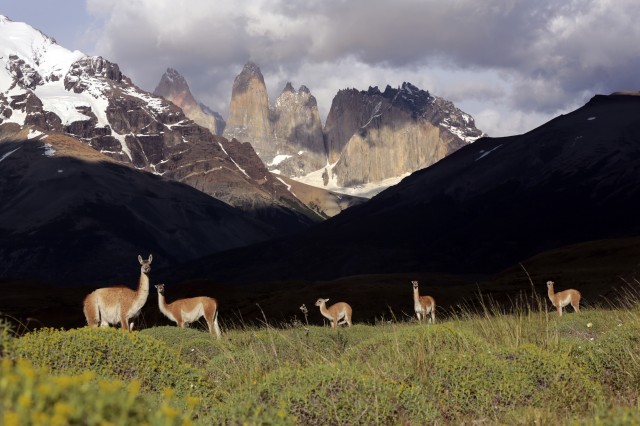 New hidden cameras arrive, and the team decide to split Estancia Lazo into sectors, sweeping each with cameras to maintain maximum coverage and enable the team to quickly learn more about the puma behaviour and movements.

Locations were selected and the new cameras installed. The team focussed on certain spots where the puma are likely to cross or gather, such as canyons and gullies with trail marks across them.

Within a week a kill is sighted on one of the cameras on the slopes of the Sierra del Toro, and a few days later another near the stone of Don Augusto – good signs of what is to come! 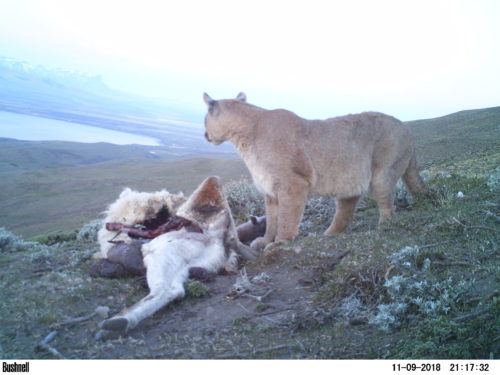 The hidden cameras take some getting used to – overly sensitive sensors leave hundreds of photos of swaying grass, whilst curious cows come to investigate, knocking or licking the cameras and leaving hundreds of bovine selfies.

The team’s excitement grows as two cameras, 400m apart, capture two images Geoffroy’s cats, an incredibly elusive feline about the size of a domestic cat, with dark spots and bands on brownish-yellow fur and black rings along the tail. These cats range across Chile and Argentina along the length of the Andes, and as far North as Peru, Bolivia, Brazil and Paraguay, living in pampas and open woodland and feeding on rodents, hares and small lizards. 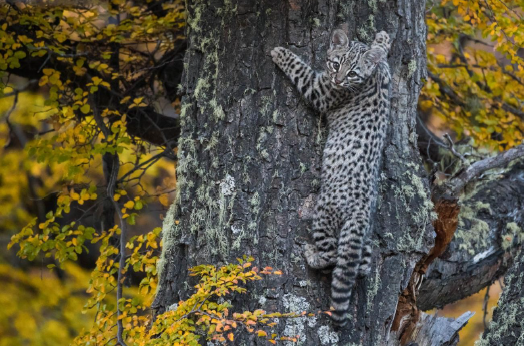 A sighting last season generated interest in the national and international media. After some discussion, the team decide to investigate further to see if they can generate more sightings of this elusive creature. What a find!

The team continue heading up to Estancia Lazo to look for puma and familiarise themselves with the terrain. Trips are made on free time and squeezed between formal excursions; tiring work and long days in the field for our dedicated guides! 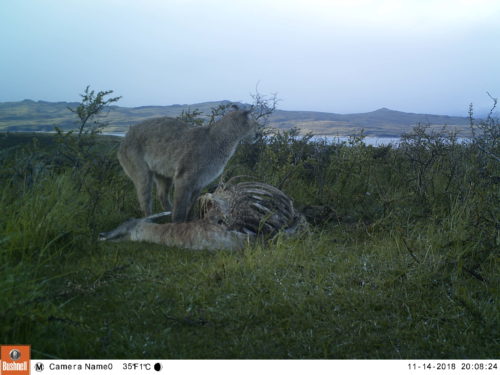 One of the purposes of the trips is to allow the guanacos to familiarize themselves with frequent human presence – they naturally see humans as a threat, eyeing the guides wearily and barking or crying out when they spot them approaching too closely. But after a few months, they begin to relax and are happy to carry on feeding as the guides look on. Progress!

The hidden cameras continue to catch regular glimpses of Geoffroy’s Cats in the same spot, always in the dead of night and the early hours. The team continue to collect images to put together an understanding of their movements and habits in the area, and widen the area covered by the cameras.

We will return with an update on the team’s progress in the second part of this blog, as we learn how their search for pumas, and the ever-elusive Geoffroy’s Cats, continues.

The Awasi Puma Foundation is a non-profit conservation project founded by the Awasi team. The work takes place at and around our Relais & Chateaux lodge, Awasi Patagonia. We rely on the hard work and dedication of our team of guides, headed by Cristian Asun. The foundation relies on funds from our lodges and donations from our guests. For more information, see the dedicated part of our website.