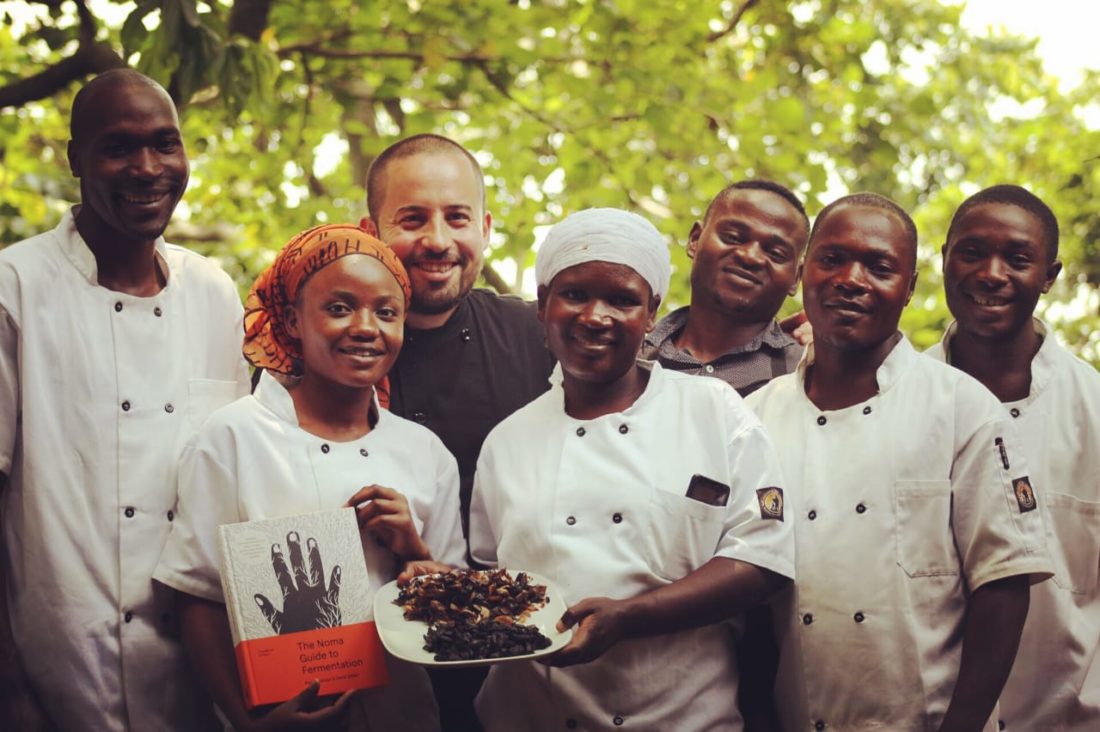 From Chile to Africa and back again, we learn about the life of Victor Vilugron, Head Chef at Awasi Patagonia.

“Born and raised in Southern Chile, I travelled and worked in many places of the world, but Patagonia keeps drawing me back in. The logistics are challenging, but the natural beauty and the pureness of the elements are a constant inspiration to create” – Chef Victor. 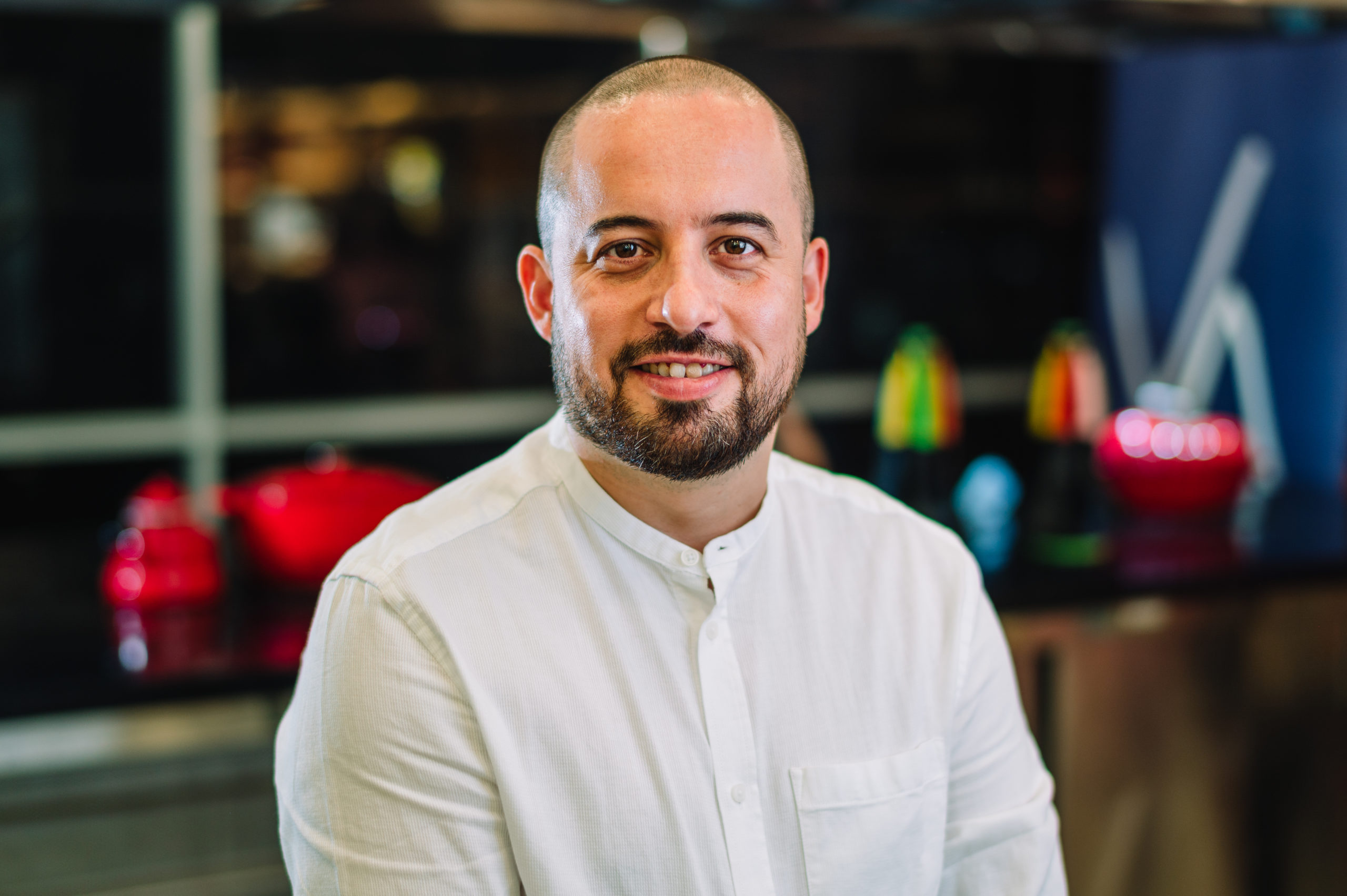 You worked at Awasi Patagonia during the opening back in 2013, what are your memories of those times?

For me, Patagonia is one of the most beautiful places on the planet, and living there is a rich source of inspiration for my cooking. It brings out the best of me, and I love the atmosphere in which we work and live together as a team. That there are many extraordinary local ingredients and unique flavours to play with.

Awasi Patagonia is located within a 200-hectare reserve of native “lenga” woodland.

The logistics were challenging at the opening of the hotel, we were just starting out and had to learn lessons along the way. The challenges were always to seek excellence, with discipline and teamwork, and we achieved a lot as a team.

Then you went to work in Africa, what motivated you to make this move and what did you do there?

Yes, since working during the opening of Awasi Patagonia, I hace spent some years working in a lodge in the Virunga National Park in the Democratic Republic of Congo. It was an incredible experience, and one that came about through a colleague at Awasi. 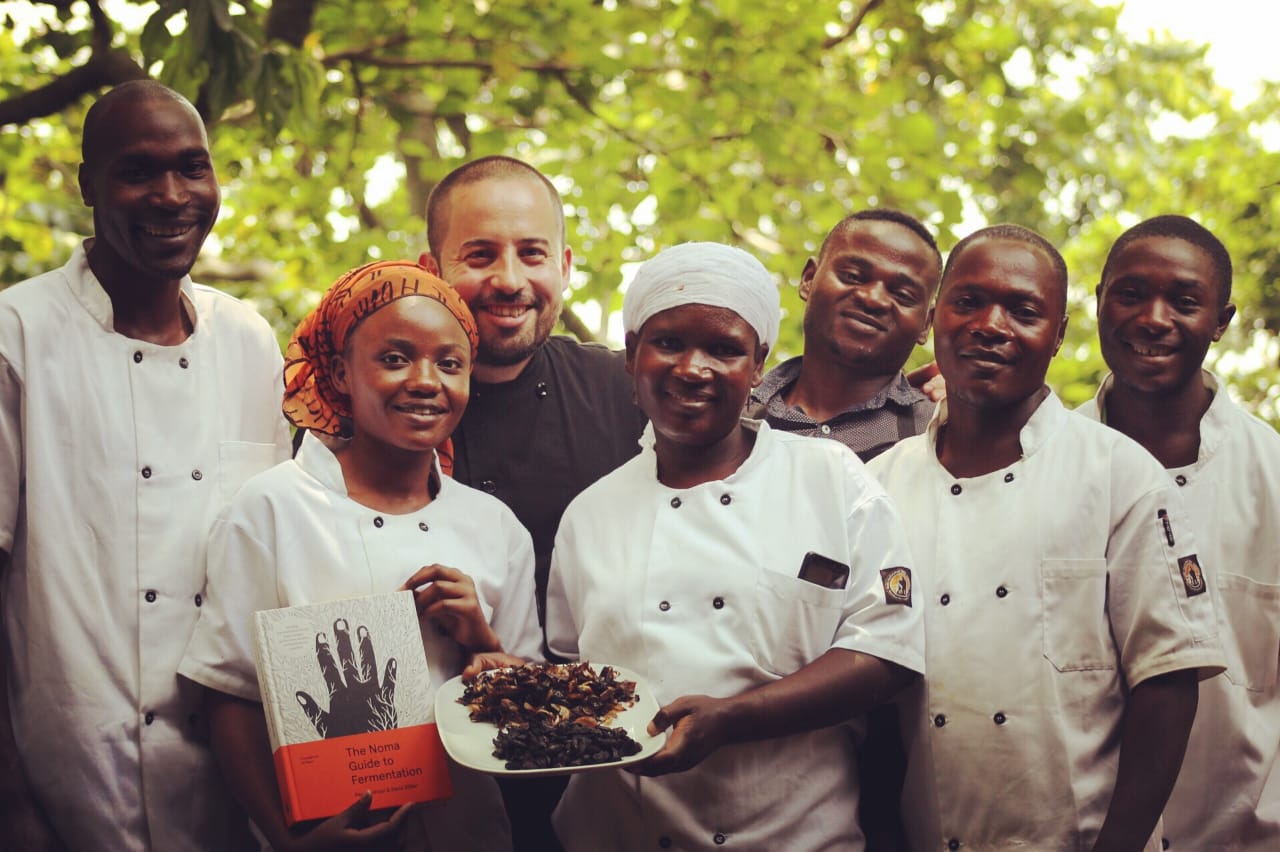 Kangaroo, one of the Awasi Patagonia guides (an Australian hence his nickname), was guide to Mr Buffet during his stay at Awasi Patagonia. They stayed in touch, and Mr Buffet offered him the opportunity to manage one of the lodges in Virunga National Park in Democratic Republic of Congo (the oldest park in Africa). Kangaroo called me one day and put me in touch with someone from the team who offered me the job of chef to the whole park, 6 kitchens in total, located in the mountains where part of the last mountain gorillas live in the world, at the summit of the Nyiragongo volcano (the volcano with the largest active lava lake and the most dangerous volcano on the planet). 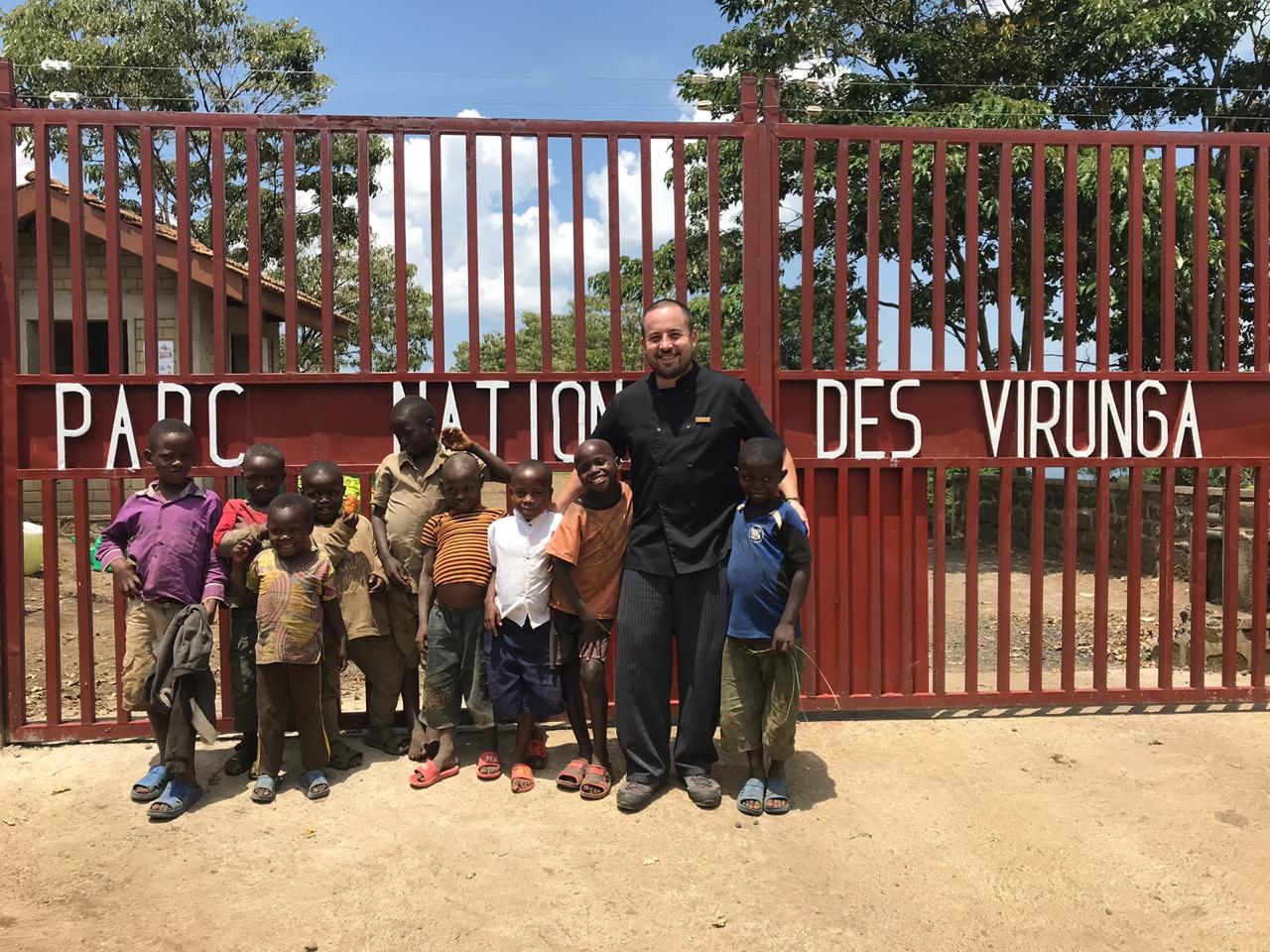 Virunga National Park is Africa’s most biodiverse protected area, home to over one thousand species of mammal, bird, reptile, and amphibian as well as 1/3 of the world’s endangered mountain gorillas.

I trained cooks, helping them to create menus, and together we made them feel proud of who they are and where they come from through the food. Two of them were sent to Tenerife for an internship thanks to a campaign that we launched to raise funds for the trip. 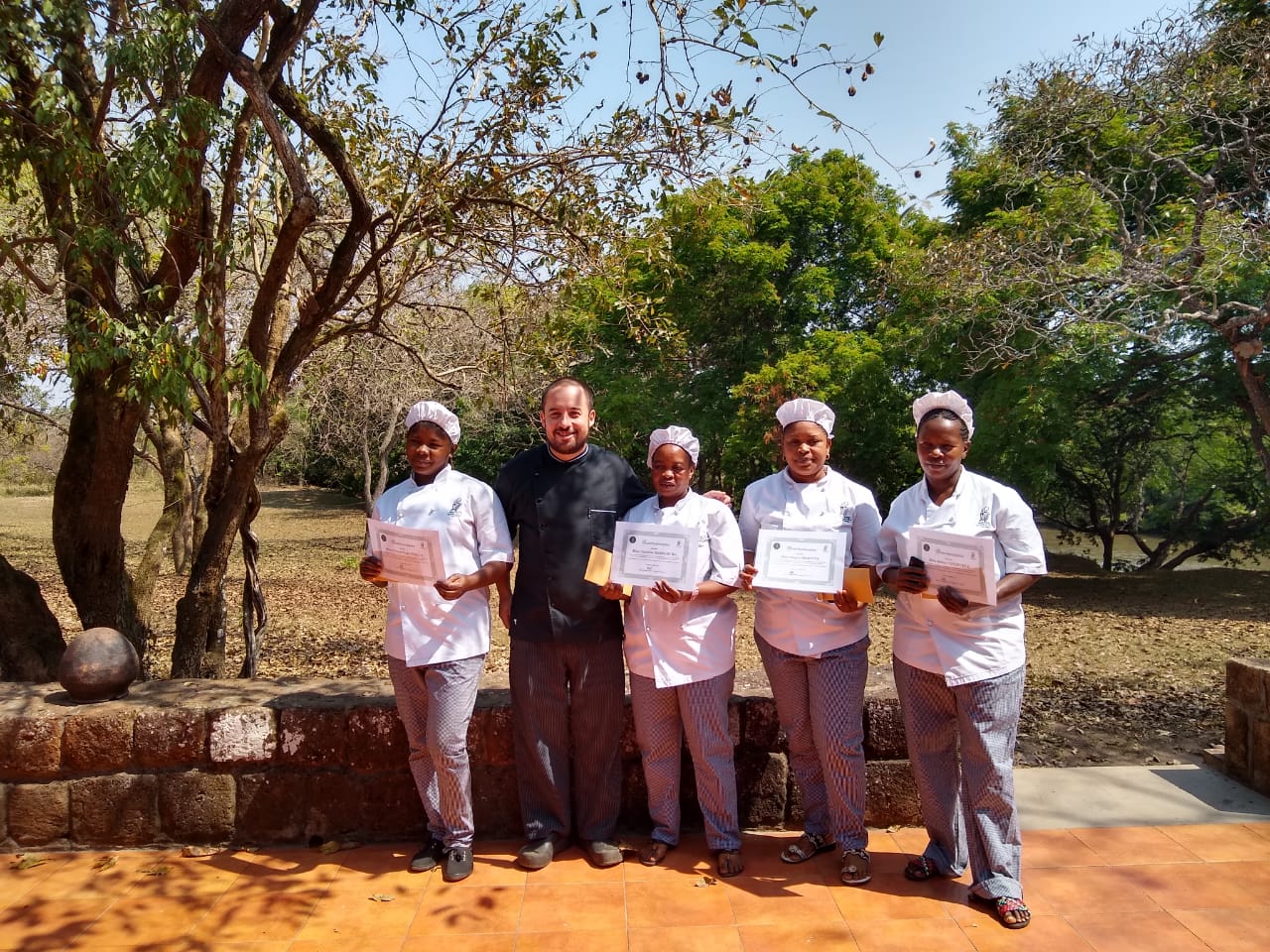 Tell me a little about how these years in the Congo have influenced you personally and professionally.

It changed my life completely, on a personal level I learned to value the simplest things in life, to live every day as if it were the last, I met many wonderful people and still try to help as much as I can with campaigns, for example, to sponsor a Congolese child with his annual tuition fees. 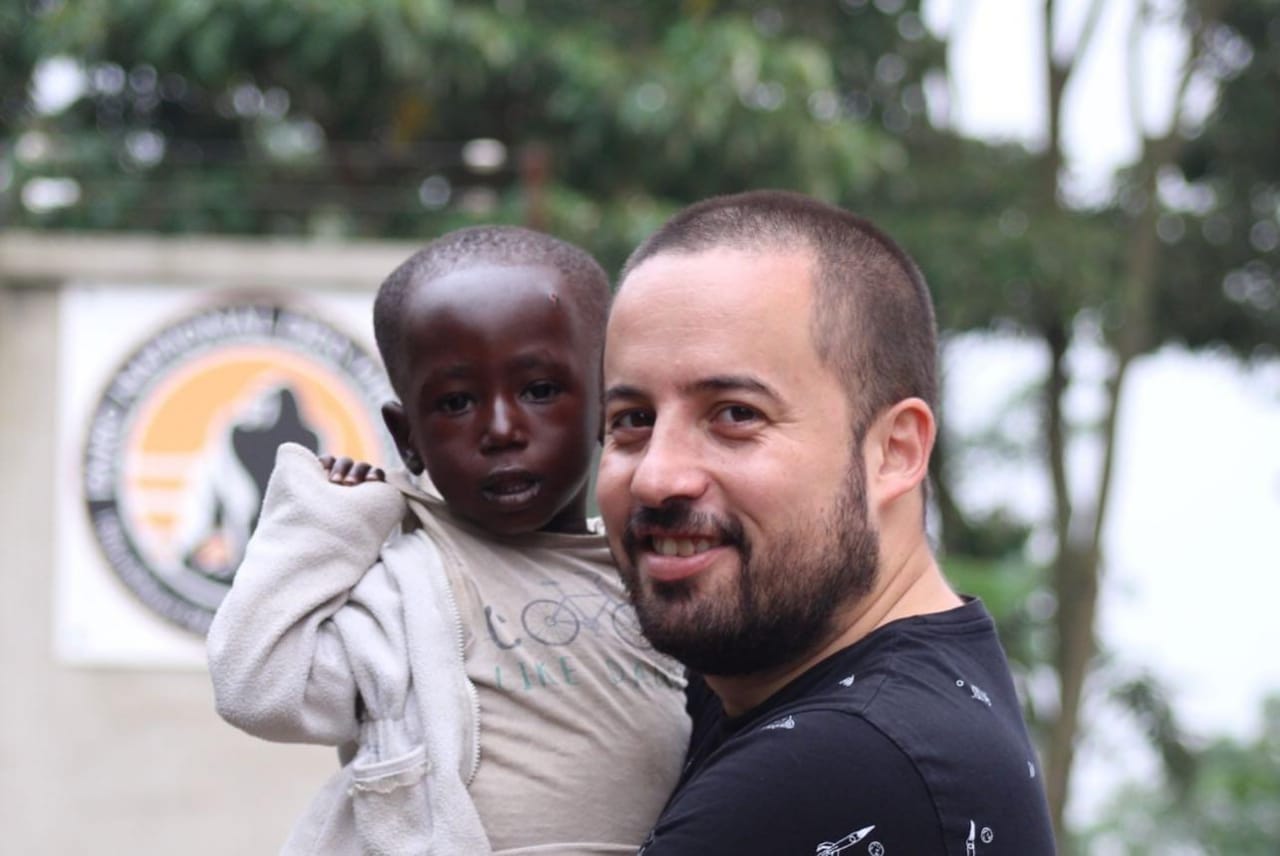 I learned a huge amount from this culture, like how to make more use of the ingredients. I also learned the Swahili language; I learned to be stronger, to face my fears with the same value with which I face the day to day, to realise that I can cook wherever I am and with any ingredients. 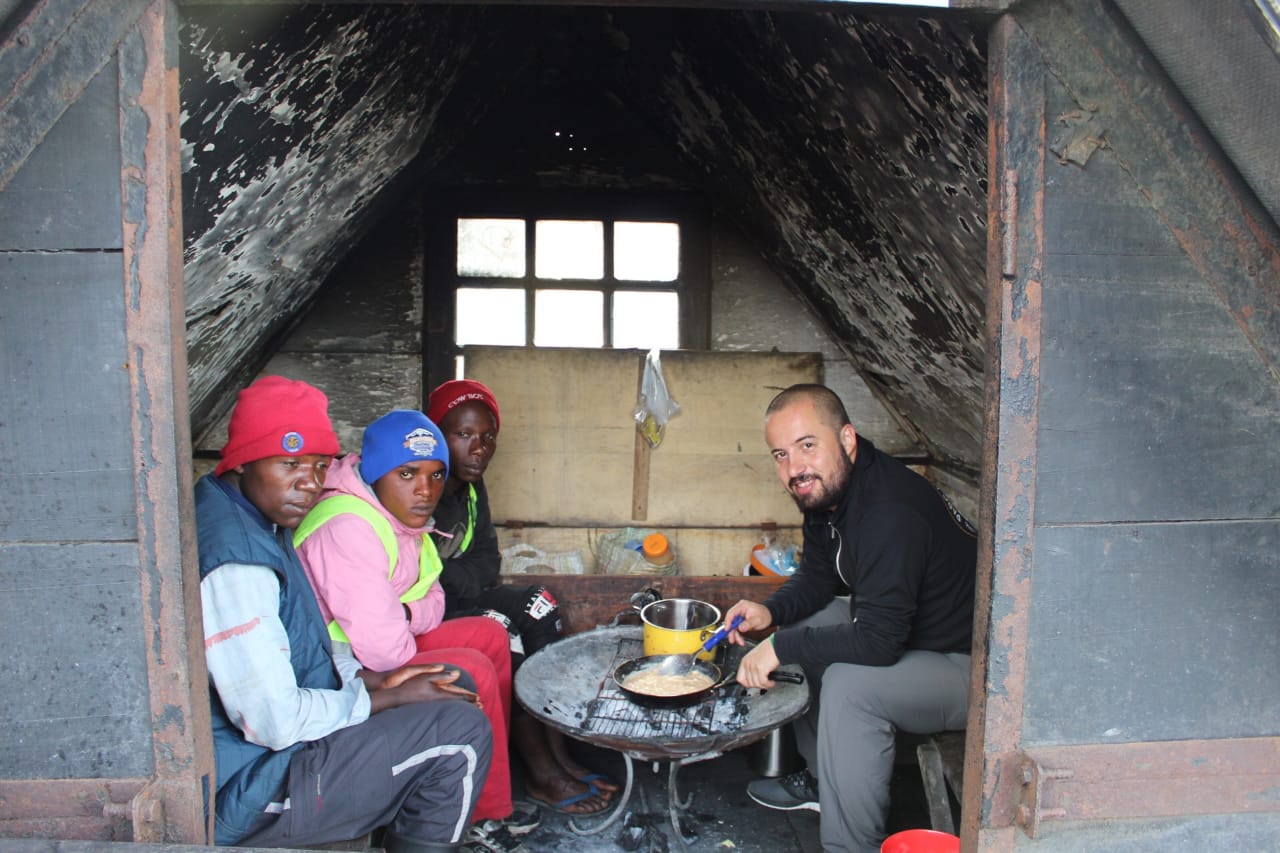 I learned that there are no limits when we do what we love. 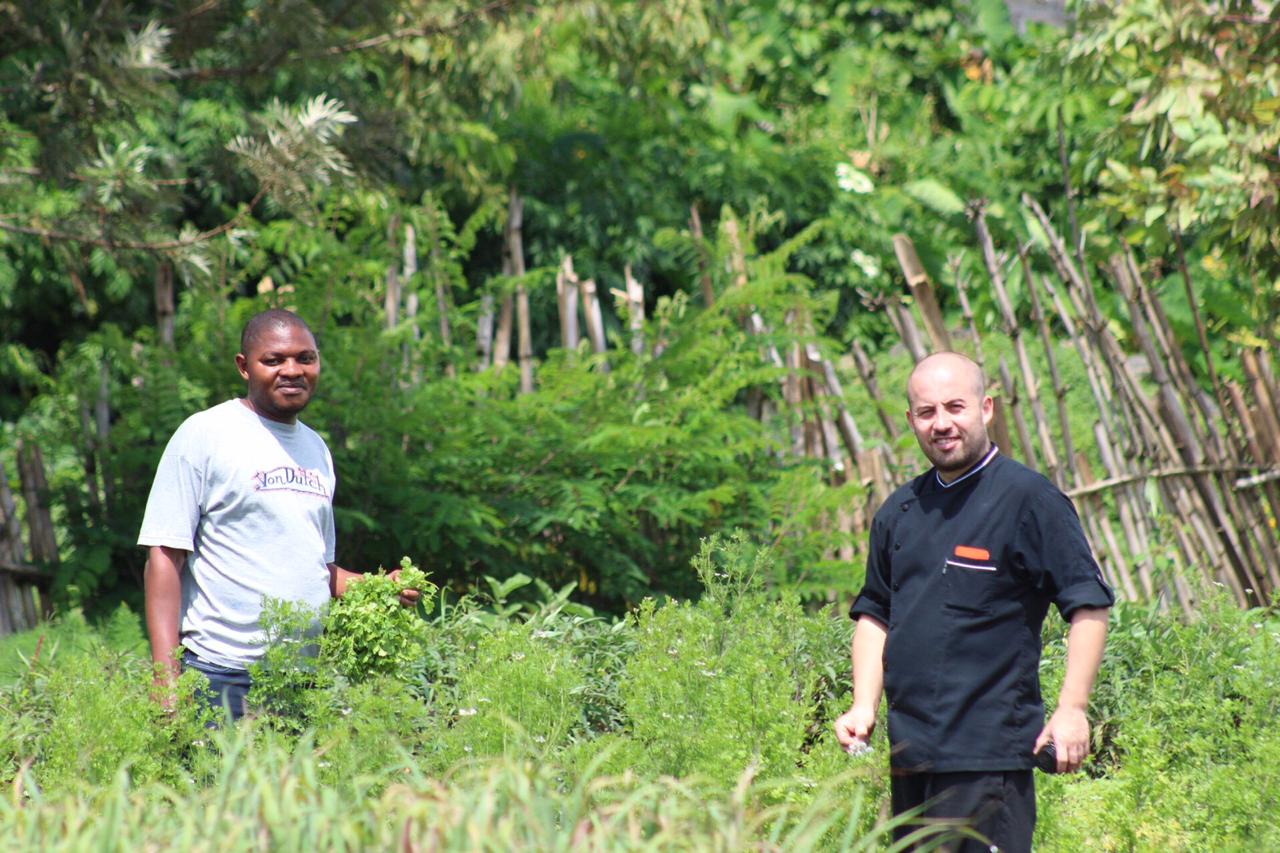 You are about to begin a new season at Awasi Patagonia, what do you hope to bring to the culinary offering?

Use of local raw materials, fresh and seasonal, top-of-the-line Chilean cheeses and charcuterie, Slow Food Chile Taste Ark products (which aim to give more value to little known ingredients), many vegetables and foraged ingredients such as mushrooms, flowers and edible herbs, regional meats, sustainable and fresh fish. The goal is to serve food that is beautifully and ethically produced with a lot of taste and use of preserves, pickles and everything that represents the place where we find ourselves. We will create unforgettable memories for every guest that passes through Awasi Patagonia. 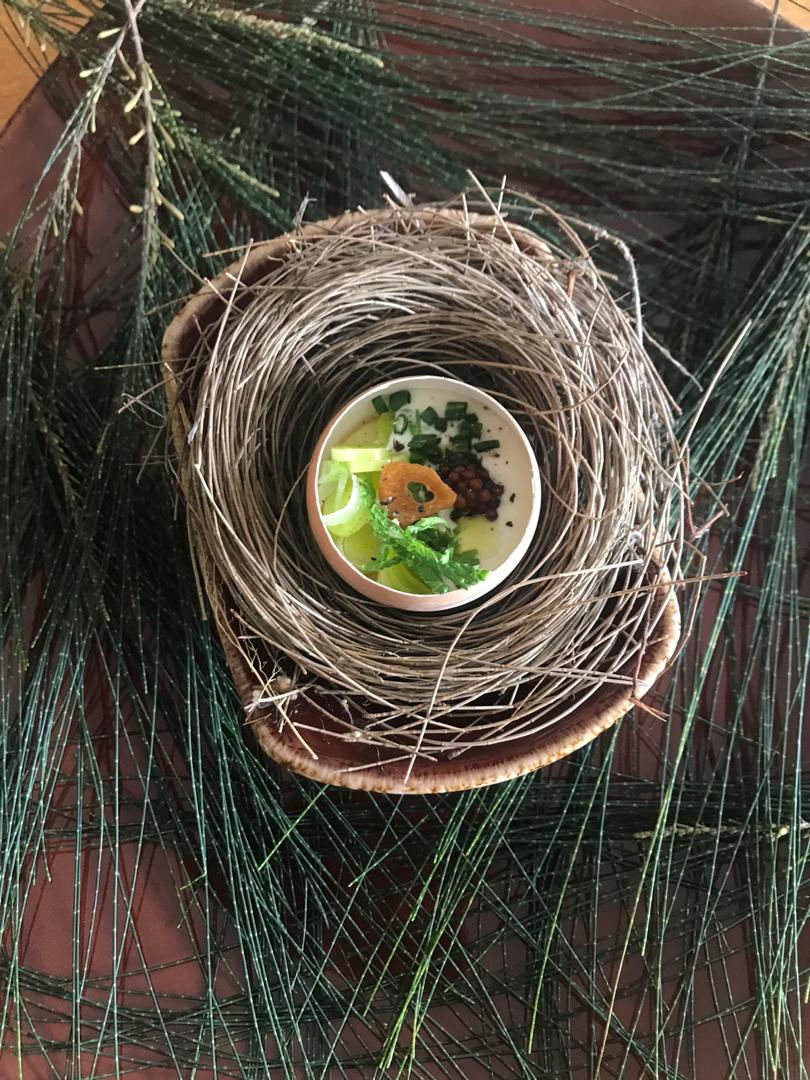 What are your favourite dishes to prepare for your loved ones? A Vilu specialty that your friends ask for?

Mushrooms, especially the morchella variety, stuffed potatoes. In general, I love to cook whatever fresh ingredients I have at hand and what produce is at its best in the place where I am. 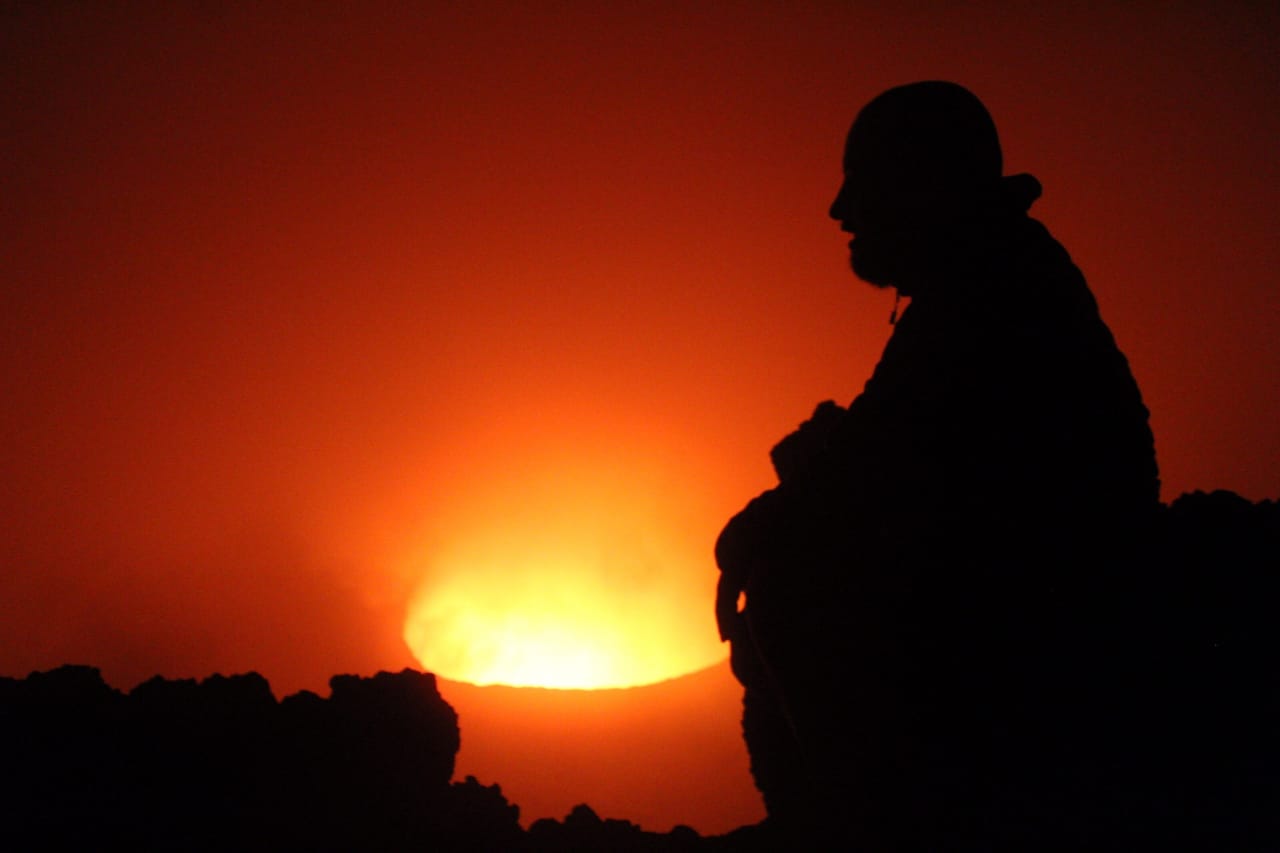 Chef Victor in front of the Nyiragongo volcano.

Going back to where it all started, where did you spend your childhood?

I was born and grew up in Collipulli, in Southern Chile, an area famous for the araucaria (also known as monkey puzzle) trees. It was there, from a young age at school, that I started learning about food. I always wanted to roll up my sleeves and cook, there is nothing that I enjoy more in life.

Were your family ‘foodies’?

Absolutely, I was hugely influenced by the women in my family who were always cooking: my grandmothers, great-aunt and aunts made me truly appreciate the joy of food. But it was my mother who has the strongest love of cooking, and ability to create something wonderful in just a few minutes. Her ‘papas rellenos’ (stuffed fried potatoes) is still my favourite dish in the entire world! 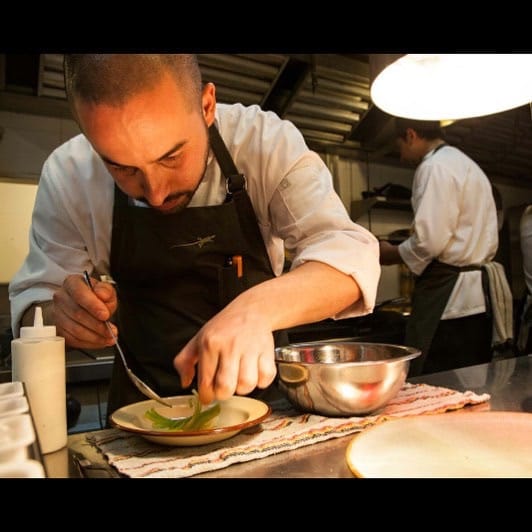 Was there a moment in particular that made you want to become a chef?

From very young age, cooking caught my attention, first seeing those who cooked food for me, and then browsing through my mother’s books and magazines, I discovered the world of gastronomy and for me it was love at first sight. From the age of 10 or so I started cooking in my house, trying my hand at my grandmother’s recipes.

Where did you study and what were your first jobs?

I studied international gastronomy at Inacap Temuco, in Southern Chile, and my first jobs included working in the casino linked to a mine (I had to cook for 3000 people!), aboard a boat, then in hotels during further studies and internships in Spain. 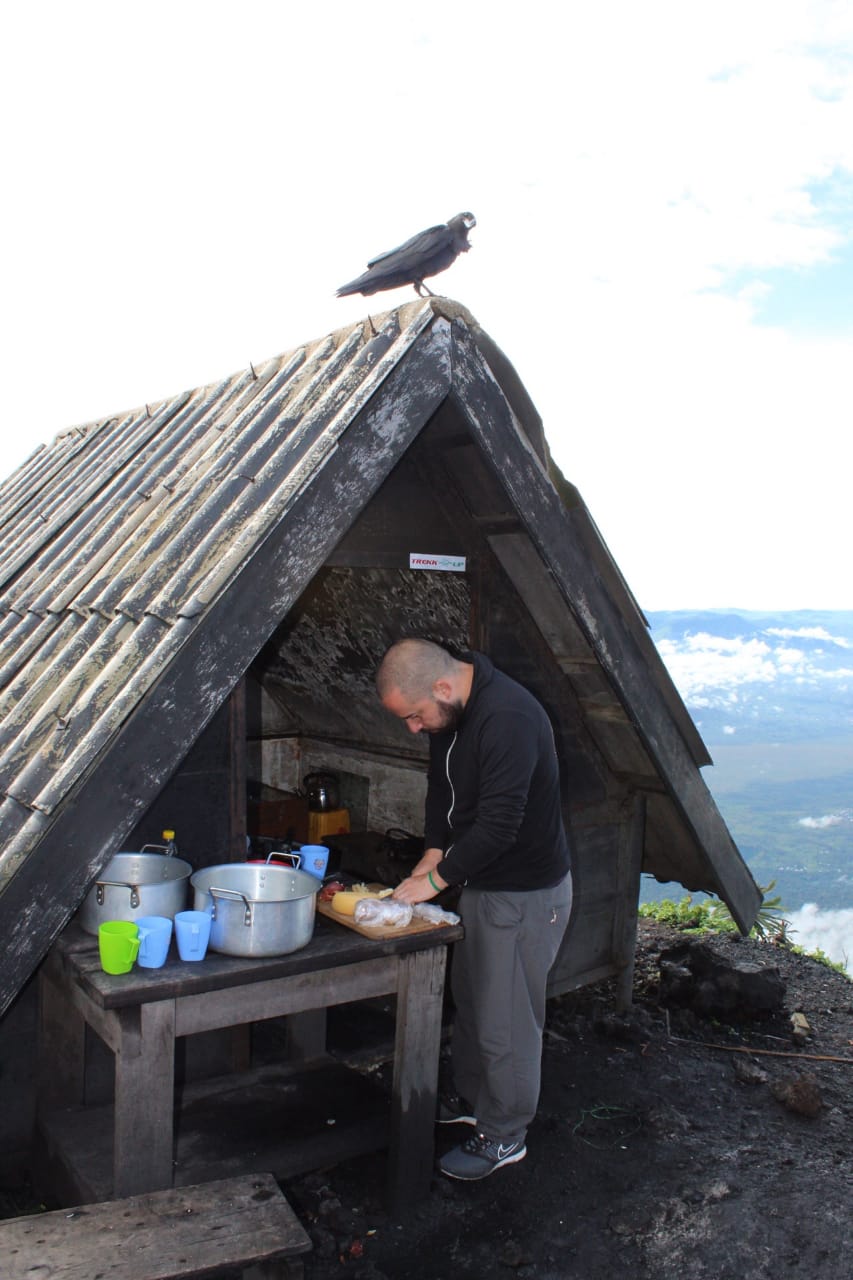 A rural kitchen for Chef Victor in the Congo

“If I’m an advocate for anything, it’s to move. As far as you can, as much as you can. Across the ocean, or simply across the river. The extent to which you can walk in someone else’s shoes or at least eat their food, it’s a plus for everybody. Open your mind, get up off the couch, move.” ― Anthony Bourdain

The ultimate adventure in Chile's Atacama Desert by Travel + Leisure